Okay. This is not huge news since I’ve been spouting about it forever, but today is the OFFICIAL release day for AT THIS MOMENT. Please read about it below, and if you’re so inclined, I’d be thrilled if you’d click on one of the links and buy it! And if you do, send me a link to prove that you bought it TODAY, MAY 31, and I’ll send you an AT THIS MOMENT lip balm in one of four book-related flavors (Lemongrass for Billy; Clementine for Kate; Jack Daniels, for Billy again; and Fuzzy Navel for Kate), as well as an AT THIS MOMENT bookmark. You can email your links to klcmaterialgirl@gmail.com. And thanks!

Sometimes life gives you what you need, even if you don’t believe you deserve it.Kate

Daniels wants it all—a big, crazy life, lots of kids, and an adoring husband. Someday. For now, she’ll be happy just to survive her first semester of college. Billy McDonald wants it all, too. Since the day he got his first guitar, he’s had one goal—to prove he’s worth something. His dream is so close, he can almost touch it.

Thrown together during a freak snowstorm, Kate and Billy’s lives become permanently entwined. On the outside, they have nothing in common, but scars aren’t always visible and abuse doesn’t always leave a mark. Kate keeps the pain of her past buried, while Billy carries his like a weapon.

In spite of finding love, Billy continues to be haunted by his childhood and tempted by the excesses of the music industry. He struggles to keep his career on track and his inner demons at bay, until one night, he makes a mistake that could cost him everything. Kate may have found her happily ever after, but for Billy, the nightmare has just begun.

Set against a backdrop of heavy metal and emerging grunge, At This Moment is the first book in the Of Love and Madness trilogy. A love story that unfolds over twenty-five years, it’s the tale of two damaged people trying to make their way in the world without destroying themselves or each other in the process.

Billy didn’t say a word when he picked them up at the subway station, and he did little more than grunt when he dropped Joey off at his station a few blocks later. He remained quiet as they drove through Brooklyn, over the Williamsburg Bridge, and into Lower Manhattan. Kate tried several times to engage him in conversation, but he just stared straight ahead, saying nothing.

After they pulled into the parking lot behind their apartment, he turned off the van and sat drumming his fingers on the steering wheel. She waited until he got out, then followed, expecting to help carry his bags.

“Fine.” It was her turn to get angry. She’d only agreed to do this video because of him. Plus it was his idea—or Christa’s, the little blond weasel—that no one know they were a couple. It wasn’t her fault she caused a stir. Not totally.

She bolted ahead, letting the door slam shut as he approached, and stomped up the stairs and down the hall to their apartment. Throwing her bag on the couch, she went into the bathroom to take off her makeup.

When she came out, Billy was sitting on the bed.

As she stormed past him, Billy grabbed her by the hand and pulled her into his lap, locking his arms around her. She sat stiffly, staring straight ahead, her jaw tight, not willing to look at him.

“I’m sorry,” he said finally, pressing his forehead into her shoulder. “I’m not mad at you. I’m mad at me.”

“Are you saying that because you didn’t like Bailey hitting on me or the other guys looking at me?”

“I didn’t like any of it. I also didn’t like you having to walk in without me and leave without me, even with Joey—who hates me, by the way.”

He snorted. “I’ll call Christa tomorrow. Tell her we’re not doing this.”

“No. That we have to do. But I’m not making believe we’re not a couple. I don’t see the need for it. I’m not in this for the women. I’m a musician, not a gigolo.”

He shook his head.

He looked up, surprised. “What does that mean?”

Karen Cimms is a writer, editor, and music lover. She was born and raised in New Jersey and still thinks of the Garden State as home. She began her career at an early age rewriting the endings to her favorite books. It was a mostly unsuccessful endeavor, but she likes to think she invented fanfiction.

Karen is a lifelong Jersey corn enthusiast, and is obsessed with (in no particular order) books, shoes, dishes, and Brad Pitt. In her spare time she likes to quilt, decorate, and entertain. Just kidding–she has no spare time.

Although she loves pigeons, she is terrified of pet birds, scary movies and Mr. Peanut.

Karen is married to her favorite lead guitar player. Her children enjoy tormenting her with countless mean-spirited pranks because they love her, or so they say. She currently lives in Northeast Pennsylvania, although her heart is usually in Maine.

“At This Moment” is her debut novel. 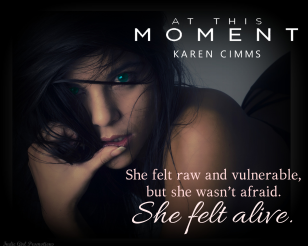